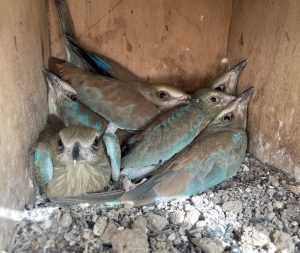 In 2018, a bird poacher, who used to remove chicks illegally from their wild nests in Central Italy, was the focus of a complex investigation by law-enforcement. Several clues were found suggesting his illegal activity against wildlife, and some items were seized by the authorities from his home, including a carrier probably used to restrain birds. The bird carrier was delivered to the Forensic Genetics Laboratory (Istituto Zooprofilattico Sperimentale del Lazio e della Toscana “M. Aleandri”) where evidence of the offense was looked for through molecular tools. To identify the species of origin for the poached birds, portions of two mitochondrial markers (Cytochrome b and Cytochrome oxidase I) were amplified and sequenced using the DNA isolated from biological traces that were found inside the carrier. Sequences from the evidence samples were compared for homology with those lodged in online genetic repositories. The results revealed that at least one individual of European roller (Coracias garrulus), a protected bird species listed as vulnerable in the Italian Red List, had been restrained in that pet carrier. Species identification was further confirmed through comparison with sequences from an in-house C. garrulus sample. Eventually, the suspect and seven more people were formally charged with poaching of protected species, and a long list of further crimes.