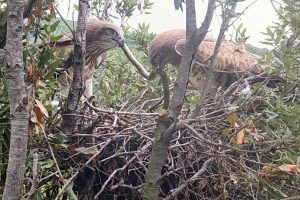 Short-toed Eagle Circaetus gallicus is the only snake eagle that nests in the Palearctic. Its diet has been studied in several European countries and it is essentially based on reptiles. The aims of this work were to characterise the feeding habits of Short-toed Eagle breeding in the Tolfa Mountains (Central Italy) including a comparison of the diet with that of other populations. Moreover, we assessed changes in the diet of the former population using published data collected more than 35 years ago. We monitored five nests and three roosts between 2020 and 2021. Using camera traps and the collection and analysis of feeding remains, a total of 247 prey items were identified. The diet of the sampled nests/individuals was clearly snake-based (93.5% of prey spectrum). We found no significant differences between the diet of nestlings and adult individuals. The main prey was the Western Whip Snake Hierophis viridiflavus (83% of snakes captured), probably due to its high availability in the environment and its average size, which is positively selected by the Short-toed Eagle. Long-term comparison with previous data shows an over time contraction of the diet breadth with a relative increase of H. viridiflavus compared to other prey. The same pattern is observed in long-term studies on the snake community of our study area and is probably linked to both local anthropogenic impacts and global warming, which tend to favour thermophilic and generalist snake species such as H. viridiflavus. During the reproductive period our population showed a narrower diet breadth when compared to the diet of other Mediterranean sites, but a similar overall structure, with a comparable frequency of snakes. The populations with the wider diet breadth are those located in areas with a greater abundance of thermophilic snake species of medium to large size, such as France, Spain and Greece.