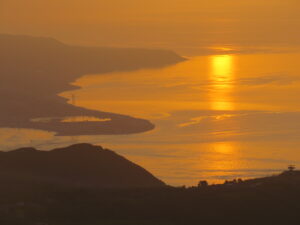 The Strait of Messina, in southern Italy, is a well-known migration hotspot for diurnal migrants such as raptors. Radar studies have also shown that there is a considerable rate of nocturnal passage of migrants during spring migration. During the spring season 2015, we combined mist net trapping with radar observations at a site on the Calabrian side of the Strait, to characterize the species composition of nocturnally migrating passerines, and to investigate the relationship between the numbers of birds flying over and the ones stopping at the study site. Despite the radar counted nearly four millions tracks of birds flying overhead, only 242 individuals were captured with mist nets during the same period. Of these, only 70 (28.9 %) were potential migrants. There was no correlation between the number of daily captures and the number of tracks recorded by radar on the previous night. The application of radar observations clearly shows that a large proportion of passing migrants may go undetected when relying on counts of birds at a watchpoint for diurnal observations only. The Strait of Messina seems to be a passage site for nocturnally migrating birds including songbirds. However, most favourable stopover sites for these birds might be found further South, possibly not far from our study site.