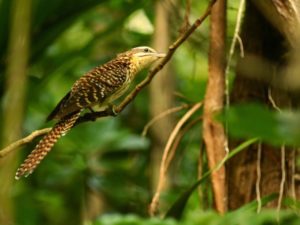 Many avian hosts of brood parasitic birds discriminate between various types of threats at the nest and may respond with categorically different, specifically anti-predatory or anti-parasitic behaviors. Alternatively, hosts may adjust their responses to threat level in a graded manner, responding more aggressively to brood parasites during the laying and incubation stages of nesting, when nests are most susceptible to parasitism, and more aggressively to nest predators during the nestling and fledgling stages when predation would be more costly than parasitism. In New Zealand, endemic host Whiteheads Mohoua albicilla act inconspicuously around their nests in the presence of sympatric Long-tailed Cuckoos Urodynamis taitensis, their obligate brood parasite, perhaps to avoid disclosing nest location. We tested behavioral responses of a Whitehead population on Tiritiri Matangi Island that has been breeding allopatrically from cuckoos for 17 years. We also presented models of the allopatric parasite, a sympatric predator (Morepork Owl, Ninox novaeseelandiae), and a sympatric, non-threatening, introduced heterospecific (Song Thrush, Turdus philomelos) during the egg and chick stages, and to groups of cooperatively breeding Whiteheads. We compared responses across nest stages and stimulus types. We found that, unlike sympatric Whiteheads elsewhere in New Zealand, Whiteheads on Tiritiri Matangi produced alarm calls in response to the cuckoo model. Furthermore, the rate of alarm calling was similar towards the cuckoo and the owl, and across the egg and chick stages, and higher than to the control stimulus. Despite the limitations of the study, these results are consistent with allopatric Whiteheads having lost their specific anti-parasitic defense tactics in response to brood parasitic cuckoos.