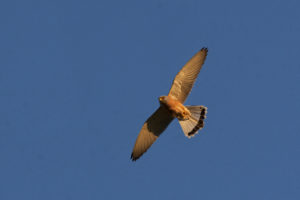 Stable isotopes are nowadays commonly used in the study of many key features of avian ecology. However, the adequate choice of what isotopic ratio to consider and what tissues to sample for assessing specific questions may be tricky. Here, we explored the variation in a suite of stable isotope ratios (δ13C, δ15N, δ34S, δ2H, δ18O) in the feathers and claws of chicks of Lesser Kestrels Falco naumanni from south-eastern Sicily (Italy) sampled throughout colonies of the same population but surrounded by different habitats. Our aims are to provide an insight into the isotopic ecology of Lesser Kestrel and to provide methodological indications for future studies. Specifically, we tested whether stable isotope ratios (i) were consistent between feathers and claws; (ii) differed within and between colonies; (iii) reflected differences in surrounding habitats. We found that all isotope ratios significantly differed between claws and feathers. Hierarchical cluster analyses revealed a high consistency of stable isotope ratios for all the elements between siblings and nests within the same colony. Significant differences in stable isotope ratios emerged among colonies and were associated to differences in the surrounding habitat. The isotope approach has great potential in the study of lesser kestrel ecology, and our results suggest which element should be selected to approach a set of different ecological questions.