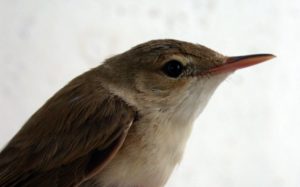 We used capture-mark-recapture data from three ringing sites in central-northern Italy to estimate adult survival, recruitment and population growth rates of the Common Reed Warbler. We used software MARK to analyze mist-netting data collected according to the Italian Constant Effort Site ringing scheme (named PRISCO). At each site, rate estimates were adjusted for transient birds with respect to sex. Expressed as percentages, survival rates at Palude Brusà (VR) site were 63±6 for both sexes; at Punte Alberete (RA) were 61±4 for males and 48±5 for females; at Emissario Trasimeno (PG) 48±2 for both sexes. Recruitment rates, for both sexes, at Palude Brusà were 46 ± 8, Punte Alberete 50±6 and Emissario Trasimeno 63±6. At Punte Alberete and at Emissario Trasimeno, Common Reed Warbler populations decreased during the study periods; at Palude Brusà the population remained substantially stable. This investigation can not fully prove it, but our experience in these 10 years of study makes us think that populations decline observed above all at Punte Alberete and Emissario Trasimeno, is most likely caused by the incorrect management of the water levels of the reed beds during the reproductive period. At Palude Brusà , although the population remained stable during the period considered, there has been a gradual drainage and burying of the swamp with the consequent loss of the extension and the quality of the reeds. This situation, exacerbated by the small size of the area and its isolation from other wetlands, could cause, also in this site, a decline in the medium term.