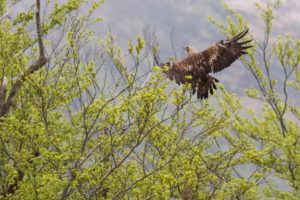 The current knowledge on the Golden Eagle Aquila chrysaetos in Alto Adige is the result of several data collection work that took place in the last 30 years. However, a complete knowledge of this species is not yet available. The large spread and distribution of this species on the territory, the difficulties in carrying out observations due to the topography and the lack of a general plan of continuous monitoring, all make it difficult to unequivocally assess a general trend for this species in the Alto Adige territory. To overcome these difficulties, a database composed of previous knowledge deriving from observations by gamekeepers, from targeted field monitoring during triennial projects, and from systematic observations by amateur enthusiasts has been used. We put together data collected during a three-year monitoring project about birds of prey in the Fanes-Senes Braies and Puez-Odle natural parks (Borgo 2001), data from the Italia-Austria 2003-2005 Aquilalp Interreg project regarding the Fanes-Senes-Braies Natural Parks, Vedrette di Ries-Aurina and Stelvio NP (Bliem et al. 2005), data collected in 2011-2014 on behalf of Markus Kantioler (Ufficio Parchi Naturali) about Alta Val Pusteria, and by Klaus Bliem (Stazione forestale Silandro) for the Stelvio NP (2002-2016) and the entire Val Venosta (2006-2016).