Autumn migration strategies of honey buzzards, black kites, marsh and Montagu’s harriers over land and over water in the Central Mediterranean 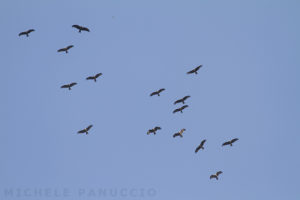 Observations on the autumn migration of honey buzzards Pernis apivorus, black kites Milvus migrans, marsh Circus aeruginosus and Montagu’s harriers Circus pygargus were made between 24 August and 10 September 2004 at the western slope of the Calabrian Apennines (Straits of Messina) and over Panarea (Lipari Islands). The aim was to compare the post-reproductive migration patterns of these raptors over land and over water along two parallel flight paths, as well as to verify the existence of a migratory movement of the black kite across the southern Tyrrhenian Sea in this period. Atotal of 7738 raptors were counted at both sites, most of which were honey buzzards (73.7%), black kites (9.1%) and marsh harriers (16.0%). Only 838 birds were seen over Panarea, most of which were marsh harriers (75.3%). No black kites were observed on Panarea. Thus, while marsh harriers migrated on a broad front, honey buzzards and black kites migrated over land and approached the Straits of Messina en route towards the Channel of Sicily, between western Sicily and Cap Bon in north Africa. This study shows no indication of a black kite migration across the southern Tyrrhenian Sea. Finally, our results confirm that, unlike spring migration, few Montagu’s harriers cross the Central Mediterranean during post-reproductive movements.