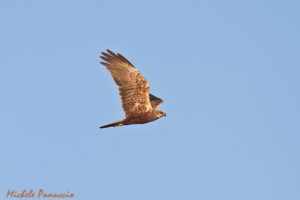 In this study we analyse the age and sex ratios of marsh harriers wintering in central Italy and Sicily. Among adults, most individuals were females (88%), whereas males accounted for only 12% of the observations. There was no difference in the proportion of juveniles and adults. The remarkable difference in numbers of males and females seems to support the hypothesis that, at least among adults crossing the central Mediterranean, males show a stronger tendency to migrate over longer distances. Among the proposed hypotheses explaining intraspecific differences in avian migration patterns, the Bergmann’s rule, which predicts that larger individuals (i.e. females in this case) are better adapted to survive in colder climates, appears to be in agreement with our results, whereas other hypotheses based on social dominance are less supported by our data, as suggested by the similar proportion of juveniles and adults.