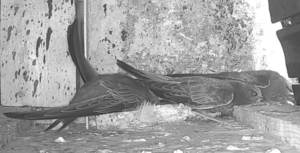 The diet of the Pallid Swift Apus pallidus in a NW Italian breeding colony was examined in the summers of 2012 and 2013 to compare the current diet against those assessed more than 20 years earlier (1987-1990). By screening 5980 prey items found in food boluses brought by adults to nestlings we identified 37 families or superfamilies pertaining to 8 arthropod orders (Araneae, Coleoptera, Diptera, Hymenoptera, Lepidoptera, Mallophaga, Odonata, Hemiptera). The highest percentage of prey was represented by Hemiptera Homoptera (42.9%) and Diptera Brachycera (21.6%), but we also found a good number of Coleoptera (7.0%). We did not find any significant differences in diets after 20 years when comparing prey abundance at higher taxonomic levels, but in the more recent samples, beetles were mostly (above 70%) represented by the allochthonous corn pest Diabrotica virgifera, a species totally absent in Italy before the year 2000. We conclude that swift colonies can destroy a huge number of agricultural insect pests, and perhaps even more importantly, regularly checking the swift`s diet at specific localities could be a useful tool for monitoring changes and the biodiversity of flying insects in anthropized ecosystems.