Ecological preferences, behavior observations of Cattle Egret Bubulcus ibis and their interactions with the cattle in the Maremma Regional Park (Tuscany, central Italy) 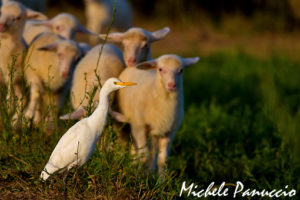 From April 2001-April 2003, we studied Cattle Egret Bubulcus ibis in the territory of the Maremma Regional Park (Tuscany, central Italy). The purpose of this work was: to define the selection preferences for varied feeding habitats, to describe Cattle Egret interactions with the livestock in the park, to investigate time budgets for various activities of the species through use of punctuated episodic (30 second) observations of individuals. The punctuated observations (1455) allowed delineation of relative amounts of time spent in various activities in an average day. We found 54% of time was spent in movements associated with the search for food, roughly 25% was spent rest and care of the plumage, 20% in actual feeding, and 1% involved flight activity. This evidence confirmed that the Maremma Regional Park is an important area for feeding by the species. Plumage patterns of all individuals in April to June suggested they were adult birds in reproductive stages of the annual life cycle. Our data indicated 80% of Cattle Egrets were observed feeding in the dry pastures with livestock and 75% of these were feeding less than 5 m from such livestock. This indicated Cattle Egrets have a strong preference for feeding in pastures frequented by livestock and they have a close association with the herds as they feed.