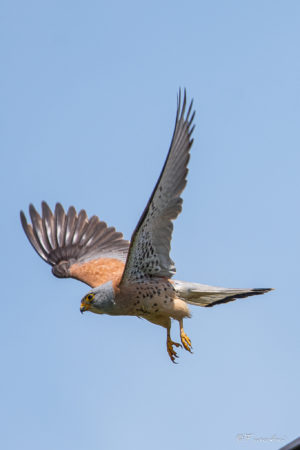 Moult is one of three major energy-demanding life-history events in the annual cycle of birds but unlike breeding and migration it is poorly studied. Most of the long-distance migratory raptors suspend moult during migration and then finish it in their wintering quarters. However, detailed information on moult at staging or premigratory sites is rather scarce. In this study, 280 shed feathers collected from communal roosts were used to investigate the moult of a migratory falcon, the Lesser Kestrel Falco naumanni during the premigratory period. The results suggest that there are several differences regarding the pattern and timing of moult between sex classes during the premigratory period, with females showing a more advanced moult stage than males. In addition, Lesser Kestrels and especially females seem to perform a complete moult of wing and tail feathers prior to migration. Birds engage in an intense moult as soon as they arrive in the premigration areas whereas such moult strategy could be considered as an adaptation for exploiting superabundant food resources available in the area during late August.