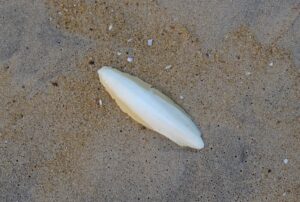 Birds require calcium carbonate for skeleton and egg development. For this reason, cuttlebones of Sepia cuttlefish can be considerate a dietary supplement and often bear signs of pecking by birds (mainly gulls and other seabirds). Due to the different structure of cuttlebones (dorsal vs. ventral regions), I hypothesized that birds peck more intensely the anterior and ventral part these being softer and thicker. On a sample of 89 cuttlebones of Sepia cuttlefish, a relatively high percentage (88.8%) showed pecking signs by birds. All cuttlebones pecked showed signs on the ventral part while signs on the dorsal part were observed in significantly lower frequency. In the ventral part, no significant differences were found between the anterior and the posterior region. The longest cuttlebones showed a significant higher frequency of pecking signs, likely because of the longest cuttlebones are also those with greater thickness (and, therefore, with higher availability of calcium aragonite). These are the first evidences from Mediterranean area. Since expanded polystyrene, an increasingly abundant anthropogenic debris in natural environments, was often pecked because confused with cuttlebones, our first data may have conservation implications in the disciplinary arena of marine/beach litter research.