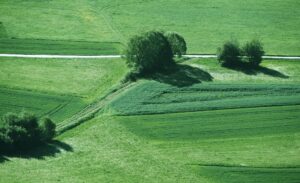 An agroecosystem with high environmental heterogeneity located in the low Veronese Po plain (Italy) was monitored over a seven-year period, from 2013 to 2019. In the study area three transects representative of three types of environment were selected: arboreal-shrubby hedge, cultivated land, and linear wood. Using a line transect method, five visits were made in each breeding season. For each habitat type, the following indices were calculated: Richness, Relative species frequency, I.K.A., Abundance and Density of territorial males, and Shannon Diversity. A total of 39 breeding species were registered. Whittaker's diagrams highlighted the presence of high levels of richness and diversity in the linear wood and arboreal-shrubby hedge environments. The cultivated area hosts species considered as bioindicators of highly extensive agricultural environments. The characteristics of the arboreal-shrubby hedge seemed optimal to support a well-structured and stable bird community, and some typical species of hedges such as Sylvia communis and Luscinia megarhynchos had reached I.K.A. comparable to the highest recorded in Italy. The trends of the main parameters of all three communities did not show statistically significant fluctuations in the years of sampling. The results show a high degree of general ecological interest and conservation importance of the study area, also in comparison of other similar Italian agroecosystems, since we found 14 breeding species of high conservation concern, among which three included in Annex 1 of the 2009 Directive / 147 / EC.