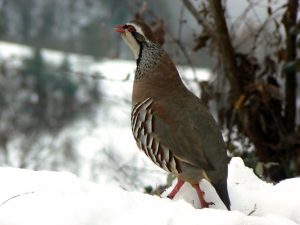 The biometrics of the Red-legged Partridge Alectoris rufa has been relatively well studied in the western part of its distribution range (Iberian Peninsula and France), especially due to the available large hunting bag samples. Conversely, the Italian population is poorly characterized. We analysed a sample of 254 live birds trapped and ringed in the northern Apennines (province of Alessandria, northwestern Italy), by measuring body mass and the length of wing, eighth primary, tail, tarsus and bill. We found significant differences in some biometric measurements between sex and age classes. A subsample of birds (n = 112) was genetically tested for introgressive hybridization with A. chukar, an introduced species, showing that 16.1 % of free-living partridge are hybrid individuals. When we analysed separately “pure” and “introgressed” birds we found only small biometric differences in body mass of adult males. Finally, our results were compared with the biometry of other populations from the whole natural range of the species (France, Spain and Portugal) showing a negative biometric trend of wing length from westernmost to southeastern birds of the range. Introgressed birds found in the studied population were not easily distinguishable with biometric criteria from pure A. rufa rufa, so genetic analysis is highly recommended when planning reintroductions or restocking.