The response of bird communities to forest loss in the district Swat Khyber Pakhtunkhwa, Pakistan 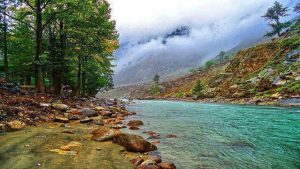 This study examines how avifauna reacts to the loss of forest cover in Swat Khyber Pakhtunkhwa, Pakistan. Birds play a key role in the ecosystem, but in disturbed areas their roles may be limited due to the changes of their natural habitats. We sampled birds in disturbed and undisturbed sites using a fixed radius point counting method. It was revealed that the species richness and abundance of bird species varied significantly between disturbed and undisturbed sites, and that this difference was related to the disturbance indices measured. The results showed that in total, 85 species of birds from 38 families were observed in the 16 sampling sites. Ardeidae (14 species, n = 178) had the greatest abundance and species richness. Twenty of the 85 locally abundant bird species (23.5%) responded significantly to the disturbance regime, resulting in changes in bird species composition. Five vegetation structure variables, including two that were substantially changed by disturbance, were found to be significantly correlated with bird species composition. All changes in bird species composition caused by disturbances are due to changes in vegetation structure. The loss of forest cover, on the other hand, has a negative effect on the diversity of frugivorous and particularly insectivorous species. Our study demonstrated the widespread effect of forest loss on bird communities in one of the most important hotspots for bird conservation and shows that many vulnerable species require extensive forest cover to persist.