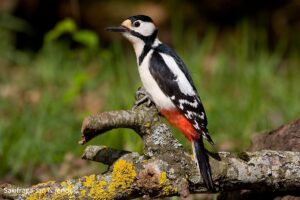 Woodpeckers have a strong affinity to forests and woodlands, even though they can also occur in man-made environments such as tree plantations, where they assume the role of keystone species thanks to
their ability to create cavities, used as nests or refuges by other animals. However, it remains unclear how the spreading of man-made environments influences the occurrence and distribution of local populations. This study aimed to investigate the macrohabitat and microhabitat selection of the Great Spotted Woodpecker during the breeding season in a protected area in northern Italy, focusing on plantations and woodland habitats. We additionally provided some data on breeding biology and estimated the density in this area. As macrohabitat characteristics, we compared the cover of woodlands (three types: oak, black locust, and willow woodlands) and tree plantations (two types: poplar plantations and reforestations). To define the microhabitat selection, we compared environmental variables around nesting sites and around an equal number of random locations in their proximity. The Great Spotted Woodpecker selected oak and black locust woodlands, but also reforestation and poplar plantations. The results of the microhabitat analysis showed that for breeding, Great Spotted Woodpeckers require food resources, but also a rather dense arboreal vegetation and large trees. We estimated a density of 7.61 ind./km2 ± 1,13 (ES), indicating a good state of conservation. In conclusion, the Great Spotted Woodpecker occurs in both natural woodlands, where it also selects the non-native black locust, and tree plantations, despite the latter possibly being used only for foraging. Even though it is a generalist species, the woodpecker may play an important role as ecosystem engineer in both tree plantations and black locust woodlands, due to the scarcity of natural cavity in these habitats. To favour the presence of the species it is advisable to (1) increase the surface of tree vegetation of any type, (2) favour the maintenance of mature trees, (3) avoid silvicultural interventions during the breeding season (late January-late July).