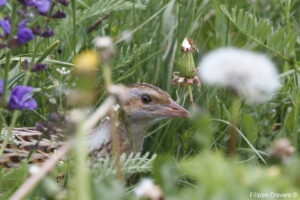 Agricultural intensification and mechanization are major threats to farmland birds in Europe. The Corncrake Crex crex was a common and widespread species in rural landscapes in Italy, but its numbers strongly declined in most of its former range in the last half of the 20th century. Although it is a well-studied species in the Eastern Italian Alps, where most of the Italian population now occurs, there is no published information from the Western part of the range. This study aimed to describe the distribution of the Corncrake in the regions of Piedmont and Aosta Valley, taking into account both historical and recent records. Additionally, we assessed the habitat in which apparently breeding individuals were found. Overall, 78 occurrences of this species were recorded in the study region. Migrating individuals occurred at lower elevations, whilst possible breeding records were located at higher elevations in meadow-pastures and secondary grasslands. Two main current hotspots were identified in the Chisone Valley and in the valleys in the province of Cuneo, which represent the core areas for the species in Piedmont and Aosta Valley. The observation trend shows a possible recovery of the population at the regional scale, although a large-scale dedicated survey is needed to estimate population size. In 2020, the highest number of singing males in one site (5) was recorded with individuals observed above 1800 m. Conservation measures at a regional scale addressing grassland management (including mowing and grazing) might benefit the species and promote a wider recolonization of the area.