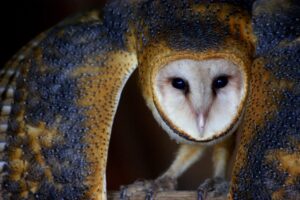 The conservation status of the barn owl at continental level is not favourable. A way to assess the success and effectiveness of conservation actions regarding the Strigiformes is to use data collected at recovery centres that host thousands of individuals. Individual barn owl’s information were collected at their arrival in six recovery-centres in Italy, two in northern Italy, two in central and two in southern Italy. Data were analysed for 1.393 Barn Owls recovered from 1993 to 2016. Four different recovery reasons were used to classify the individuals: i) trauma, ii) intoxication, iii) illegal hunting, iv) other. In three of the six centers we found a significant decrease of hospitalized Barn owls over the years, possibly because of changes in the local situations. The percentage of chicks recovered is low. Traffic death rate significantly affects young owls during their post-fledgling dispersal period and at a local level, this effect could contribute significantly to the demographic collapse of the populations, contributing to a patchy decline of the species in Italy. The collision with motor vehicles proved to be the primary cause of hospitalization, but the recovery due to illegal hunting is significant too, in particular in central and southern Italy. To limit the use of anticoagulant rodenticides, turns out to be a necessary and urgent action to help this species.