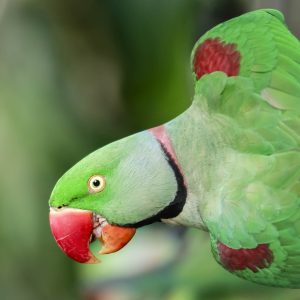 Taking into account that the previous quantitative data relating to the Rose-ringed Parakeet Psittacula krameri of Genoa (Liguria, Italy) dates back to 2009 and considering the potential impact that an alien species can have on native ones and the environment, the Genoese population of this species was studied during the years 2016-2018 to quantify its size and trend in recent years. Counts at roost resulted in a total of approximately 630 individuals, allowing us to outline the increase of the population since the first records in the 1970s: the number of individuals has rised from 46 in 1993 to more than 600 today. Data on food resources used were collected and the list of plants that parakeets feed on has been expanded. Interactions with local fauna were investigated: they turned out to be few and related to Jackdaw Corvus monedula and Urban Pigeon Columba livia var. domestica. Impacts on citizens and their activities were more consistent: damages to vegetables and garden crops were observed and the presence of roosting sites caused filth and noise. The main travel
routes to and from the main dormitories were also detected during the censuses. We could also confirm the disappearance from the territory of Genoa city of the Monk Parakeet Myiopsitta monachus.