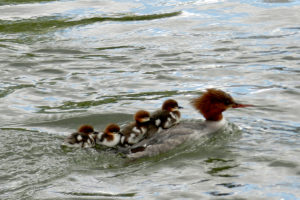 After first breeding in Italy in 1996 the Goosander has rapidly increased its breeding range in northern Italy: we analyzed the progressive expansion of Goosander in the lakes and rivers in a wide belt covering three-quarters of the sub-alpine Italian area (~45°N Lat). The study period covers the nesting seasons from 2010 to 2017. Each water body was assigned to a local coordinator that oversaw the monitoring operation during the breeding season, through a standardized census realized from the shores of each potential breeding area in the first week of June. Overall we censused a total of 282 broods (or families) in the whole period, distributed over 8 different water bodies, with the bulk of the population concentrated in the largest lakes, Maggiore, Como and Garda. The first census in 2010 estimated 12 broods while the maximum of 51 broods was reached in the last year of the survey (2017) suggesting a still ongoing increasing population trend. The number of chicks per brood ranged between 1 and 19, with a mean value of 6.9 ± 0.22. In literature brood size above 14 chicks are considered as due to brood amalgamation, which may therefore occur in north-Italian lakes. From 2011 the number of families was almost stable on the west of the study area (Lake Maggiore), while a non-significant decrease was revealed in the Lake Como, and a steady increase in the eastern Lake Garda. Overall, our findings describe the occurrence of a successful and still ongoing colonization towards east, possibly harbinger of further expansion.